One of the common classical assumptions in rheological analysis, particularly in polymer melt flow in capillary rheometers, is no-slip boundary condition. This assumption in fluid dynamics mean that at a slide boundary (e.g. at the wall of a capillary die), the melt has zero velocity relative to the boundary (wall). While this assumption is always existing for Newtonian fluids, polymer melts (especially high molecular weight molten polymers) may slip at the wall of capillary die when the wall shear stress exceeds a critical value. This undesired phenomenon is called slippage and reduces apparent viscosity. Also, the surface of the extrudate begins to be rough (appearance distortion).

Why is it important to understand wall slippage when using a capillary rheometer for rheological analysis? Wall slippage can be one of the reasons of mismatching of rheological data obtained from various dies with various geometries (various diameters). By understanding the slippage and calculating the wall slip velocity at the test condition, one can correct the rheological data for slip effects. Moreover, wall slippage is undesirable in extrusion industry as it can cause extrudate distortion and changes the appearance of final products. The intensity of appearance distortion can be anywhere from a loss of gloss or shark skin to gross melt fracture. These appearance defects can significantly affect production rate in manufacturing and therefore it is important to have a clear understanding of wall slippage phenomena. Furthermore, wall slip analysis is necessary for simulation and modeling of injection molding process specifically micro-injection molding since wall slip is more significant in small flow channels.

Picture below shows various levels of extrudate distortion due to wall slippage. The first picture from left shows an extrudate with glossy and smooth surface. No wall slip has been occurred during the processing of the first extrudate. The second extrudate (from left); however, shows some sort of surface roughness with a shape similar to a screw thread. This mild surface distortion is called shark skin and it is happening due to deviations from a no-slip boundary condition. This happens by extruding at high shear rates and more specifically for wall shear stresses greater than a critical value. The third extrudate (from left) is processed at higher shear rates (shear stresses greater than a second critical value) and has alternating pattern of glossy and rough surface. This appearance distortion which is mainly observed in highly entangled linear polymers is due to oscillatory flow of molten polymer chains at the wall interface (oscillating stick-slip behavior).  The forth, fifth, and sixth extrudate is processed at even higher shear rates and they show gross melt fracture (helical and wavy extrudate surface).The last extrudate shows a chaotic surface due to the occurrence of high intensity wall slippage (velocity profile become almost plug flow). 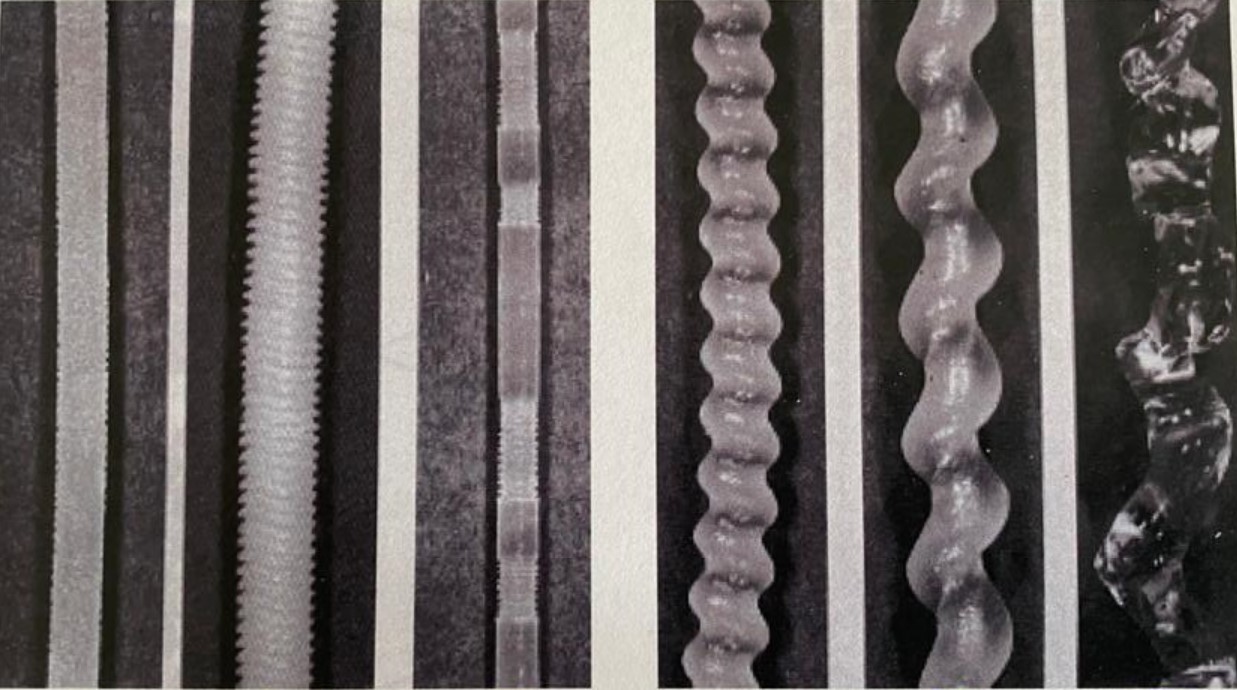 Wall slippage is more significant for polymers with high molecular weight and narrow molecular weight distribution. These polymers might experience two steps of wall slippage (weak and strong) at two stages of critical stress. This transition from weak to strong slippage can cause a discontinuity on the polymer flow curve. In other words, the discontinuity of flow curve can be a sign of transition from weak slip (normally happens at shear stress around 0.1 MPa) to a strong one (happens around 0.2-0.3 MPa). The mechanism of weak slippage in linear polymers is mostly detachment of few chains at the polymer/wall interface. The mechanism of strong slippage; however, is sudden chain disentanglement of the polymer chains in the bulk from a monolayer of polymer chains adsorbed at the wall interface.

The transition from weak to strong slip and discontinuity of flow curve (stick-slip oscillating flow) might not be significant (or even not be observed) for branched polymers and polymers with broad molecular weight distribution. For these polymers, slip starts at a critical shear tress and increases gradually with shear tress until the velocity profile becomes almost plug flow.

Factors affecting type and degree of wall slippage and extrudate distortion are as below:

How to calculate wall slip velocity in capillary rheometer?

Based on classical fluid dynamics, the apparent shear rate (assuming no slip at the wall) is calculated as follow:

where ya is apparent shear rate (1/s), Rdie is capillary die radius (mm), and Q is the volumetric flow rate (mm3/s).

Q can be shown as a factor of average velocity inside the die (V) as follow:

By replaying equation 2 into equation 1:

The two equations above are valid if no slip occurs during polymer melt flow. In case of occurrence of wall slippage, however; V needs to be replaced by (V-Vs) as follow:

where Vs is the slip velocity at wall and Ya.s is apparent shear rate when slip is occurring. By replacing equation 3 into equation 4:

Based on equation 5, in case of wall slip occurrence, the flow curve of the molten polymer will be a function of die diameter (or radius).

In order to calculate wall slip velocity the below steps needs to be performed:

The below graphs show the data from Dynisco capillary rheometer (LCR) for measurements of wall slip velocity using various sets of dies. Flow curves were obtained using three sets of dies with different diameters (1mm, 2mm, and 3mm). For each die diameter, three L/D ratios of 4, 10, and 20 were selected. All the experiments were performed on linear low-density polyethylene (LLDPE) materials at temperature of 190 °C and shear rate range of 10-290 1/s. Figure 1 shows the flow curves for each sets of die (Step 1). 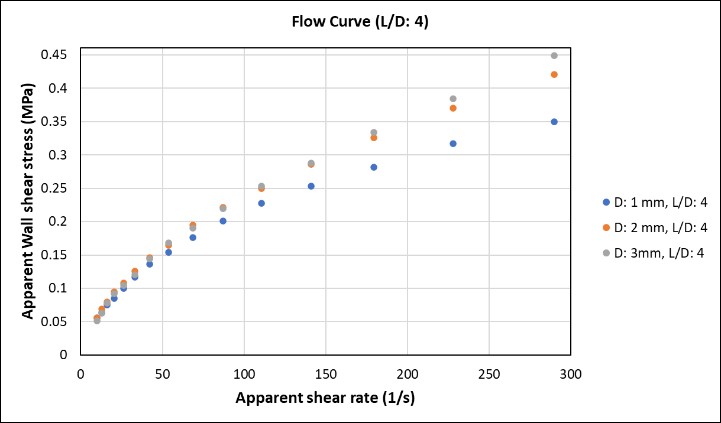 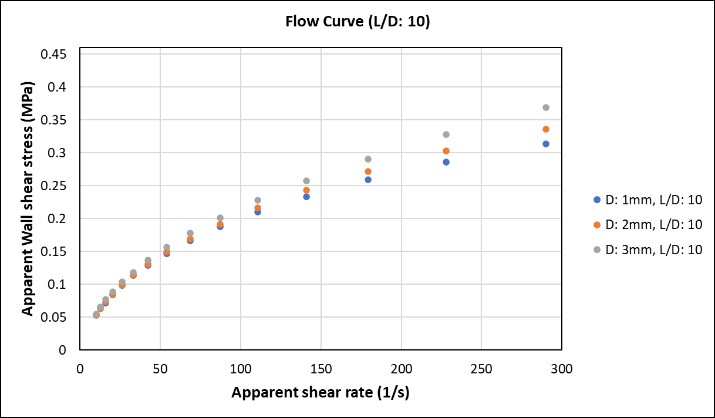 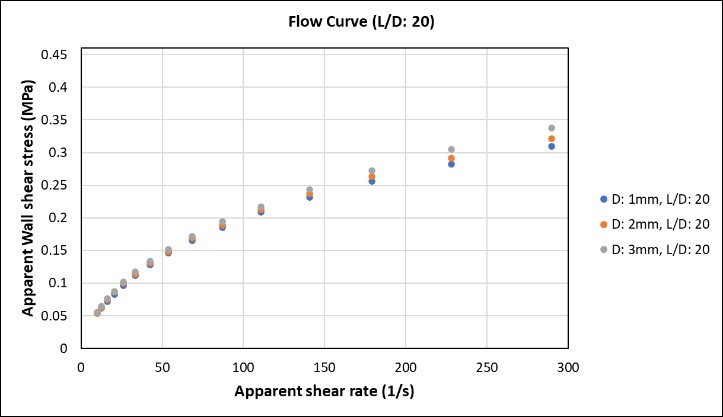 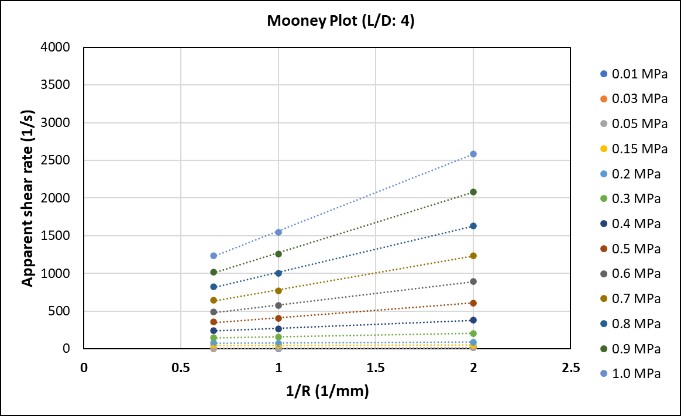 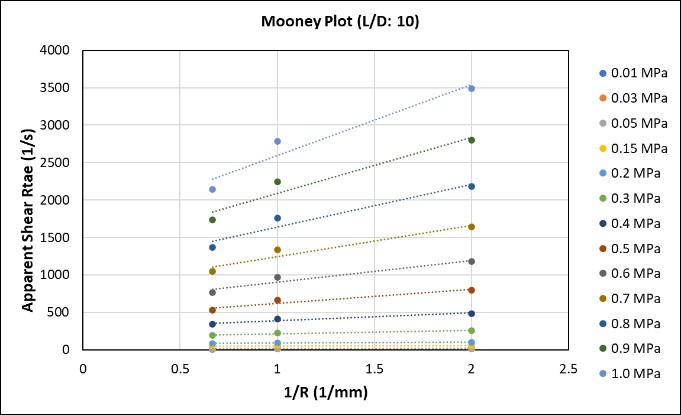 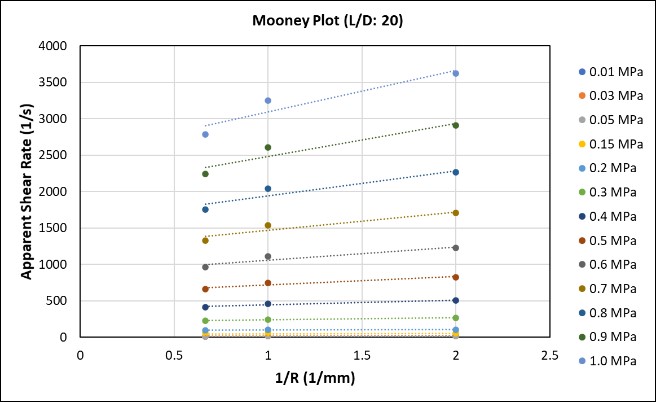 Figure 3 shows the graph of wall slip velocity versus shear stress for three sets of dies with various L/D. 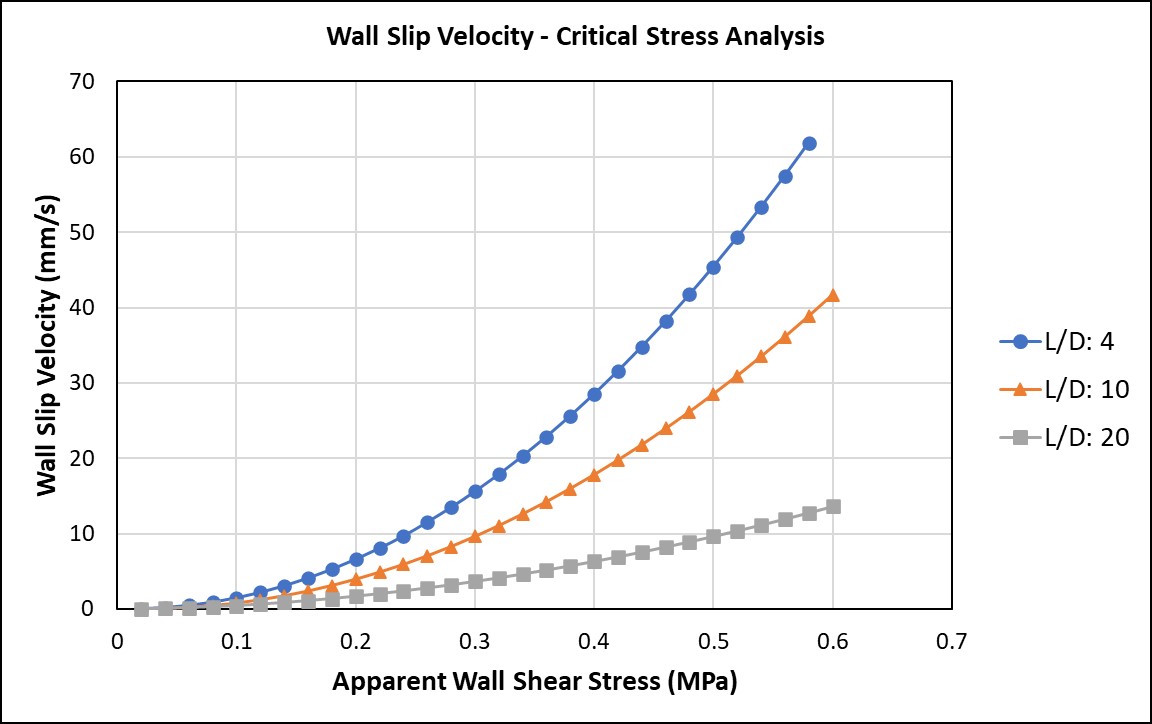