A thermal stability test can determine the resistance of a polymer melt to a change in the molecular structure at the test temperatures. The results of this test depend on the temperature, residence time at that temperature, material formulation, presence of moisture and/or contaminates. It is well known that polymer rheological properties, namely shear viscosity, is very sensitive to the changes in the polymer molecular weight, and so monitoring of these parameters over time can provide information on the polymer`s thermal stability.

Thermal stability test has various application in plastics industry. This test can be used to verify the stability of the polymer sample during a rheology test or during an actual process (such as extrusion, and injection molding). In this case, it is suggested to perform the test at a constant shear rate which corresponds that in the actual process. Also, this test method can be used to show the presence of moisture or a reactive chemical in the polymer. Furthermore, this test can provide information for kinematic analysis to measure the kinetic constant of various reactions which might be happening during the process. 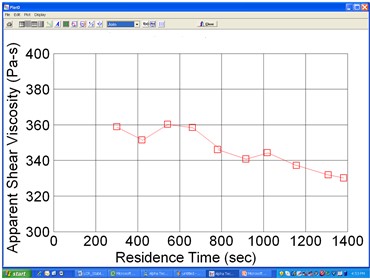 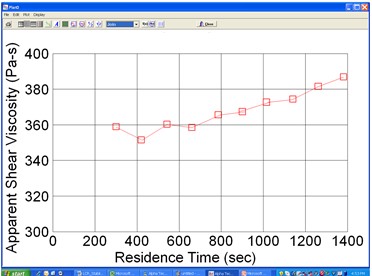 These graphs show the changes of apparent shear viscosity over about 23 minutes residence time at a constant shear rate of 80 1/s and constant temperature of 200 °C. The first graph shows a slight reduction of the shear viscosity after around 13 minutes. This can happen as a result of polymer degradation, and possible chain scission of polymer melaleucas. The second graph however; shows a steady increment of the shear viscosity over time. This can reparent the presence of a chemical reaction such polymerization, crosslinking, etc.) over time. 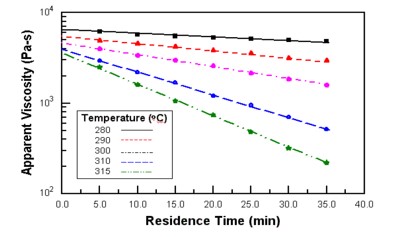 As it can be seen from Figure 2, one can perform the thermal stability tests at various temperatures and/or various shear rates and obtain a complete window into their process.