Nowadays, composites are ubiquitous in many parts of modern societies such as constructions, textiles, nonwovens, and automobile industry. In composites, interface plays a pivotal role in final mechanical properties.  Two main techniques have been introduced to fortify the interface between matrix and reinforcement: incorporating a third component as compatibilizer, ii) morphological development. Regarding the later, morphological development of polymer blends is another technique which promotes the interfacial adhesion of two incompatible polymers.

Over the last decade, various morphologies have been introduced such as droplet1, platelet2, coral3, and fibrillar4 to promote the mechanical properties of polymer blend systems. The formed morphology is under control of various parameters such as chemical structure, molecular weight, viscosity ratio, and processing parameters.3 Consequently, it can be expected that variation in the aforementioned parameters changes the final formed morphology.

In order to fibrillate the dispersed phase, various techniques such as injection molding5, compression molding,6 and fiber spinning7 are applied. Compared with the other techniques, the spinning process inserts higher elongational stress which may facilitate the fibrillation mechanism and droplet may experience the highest value of elongational stress field. Laboratory Mixing Extruder (LME) designed by Dynisco, has proved itself as a device with potential of spinning the polymer melt at different temperatures.7,8 The temperature profile of the LME is controlled in rotor and die zones. The rotor is able to rotate at various speeds and a take-up device can be coupled to draw the polymer melt as monofilament. As was reported in previous works, the LME has ability to not only function as a spinning device, but also possesses potential to fibrillate the dispersed phase in polymer blends of [Polypropylene (PP)/Poly amide 6 (PA6)] and [Polypropylene (PP)/ Polytrimethylene Terephthalate (PTT)] (schematic 1).7,8

Schematic 1   The LME setup and its components to produce fibrillary reinforced monofilaments. 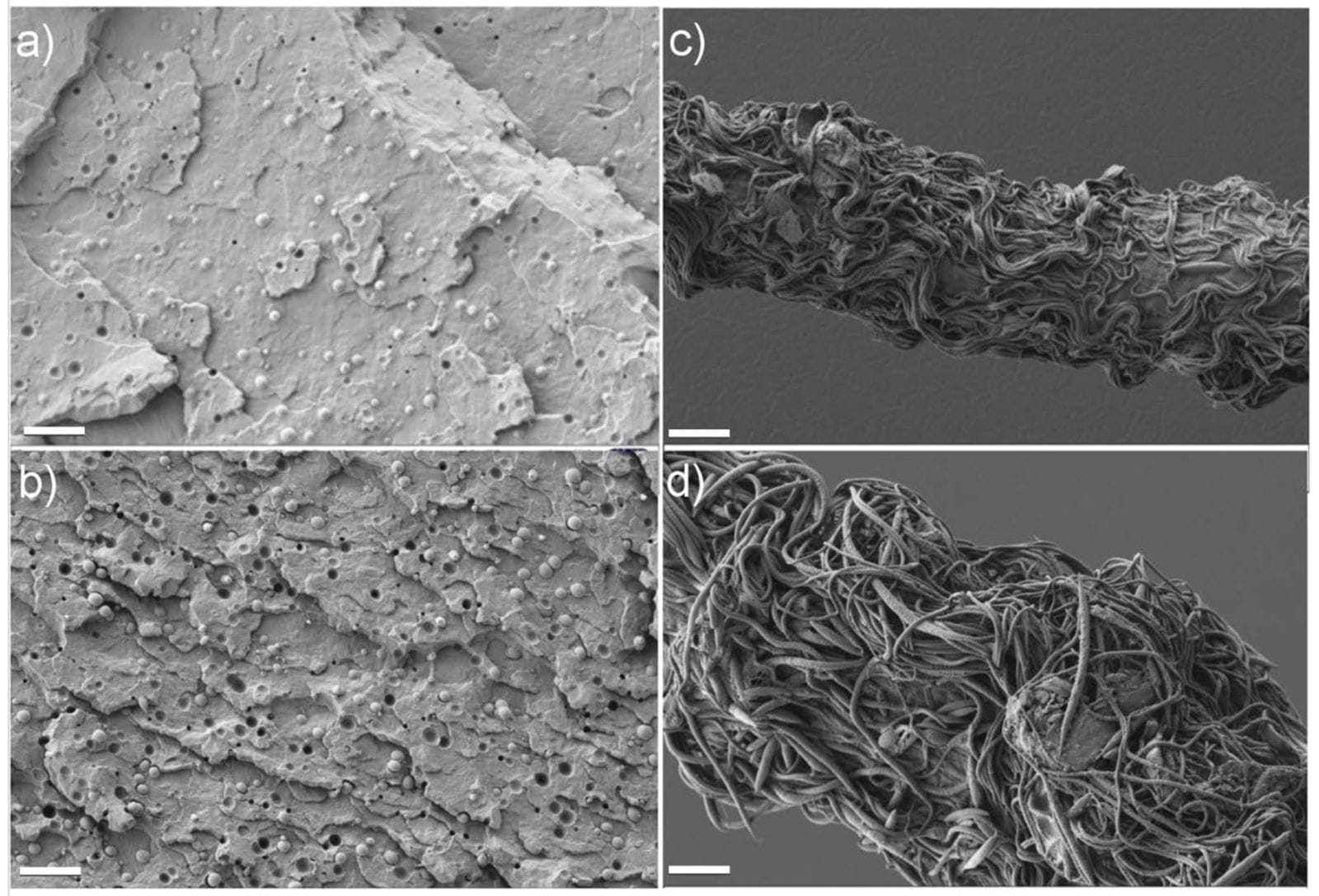 Figure 1 represents cryogenically fractured surfaces of as-extruded samples and fibers of PP/PTT. As can be observed in figure 1 a-b, as-extruded samples show a droplet-matrix morphology whose microstructures become coarser upon increasing the PTT content. The mean diameters of droplets in as-extruded samples of 6wt%. and 10wt%. were 1.26±0.7 μm, and 1.9±0.9 μm respectively. Interestingly, microstructures of fibers in figure 1 c-d revealed fibrillar entities which are oriented along the fiber axis. The mean diameters of fibrils throughout the fibers were 0.53±0.1 μm, and 0.9±0.4 μm respectively. As can be seen, the LME has potential to spin monofilaments containing fibrillar entities of PTT.

To have better understanding about the droplet deformation mechanism, rheological approach was conducted to investigate the various steps of fibrillation. As a rule of thumb, in order to keep elongated inclusions intact, the measurement temperature was kept at 195°C which is below the Tm of PTT. Figure 2 represents dynamic viscoelastic responses of as-extruded blends and fibers at 195°C. As can be seen in figure 2-a by increasing the PTT content, storage moduli of as-extruded samples increased. This enhancement can be attributed to volume fraction, interfacial tension, and size of the dispersed phase. Interestingly, fibers represented higher magnitudes along with non-terminal trend compared with as-extruded samples at low frequency. The appearance of secondary plateau was also observed for PP/PA6 blend system in which PA6 droplets formed fibrillated texture throughout the PP matrix.7 This non-terminal behavior was ascribed to the presence of fibrillated droplets and the growth of the physical fibrillar network (PFN) is reflected by enhancement in storage modulus and widening of the secondary plateau at low frequency region.8

Flow behaviors of the fibril-fortified fibers are represented in η*-ω graphs (figure 2-b). As can be seen, the complex viscosity of as-extruded samples at low frequencies enhanced by increasing the PTT content. Intriguingly, the flow behaviors of the fibers showed a pronounced increase in complex viscosity in the form of viscosity upturn, together with quicker shift to power-law region with respect to increasing the PTT content and as a result of fibril maturation. The observed upturn of complex viscosity at low frequencies can be attributed to yield behavior of fibril-concentrated PP matrix.

Fibrillar morphology as one of the most efficient morphologies enables the blend systems to obviate the aggregation issue of nano-fillers in nanocomposites. As a result, optimizing the processing conditions, in order to reach optimized properties, would be of interest. In this study, the LME proved itself as a spinning tool to fibrillate the droplet phase in the blend system of PP/PTT. It was found that upon formation of fibrillar entities, terminal behavior is replaced with non-terminal trend. In addition, the fibril growth can be reflected by enhancement of the secondary plateau along with broadening of this region which can be considered as the transformation of droplet phase into fibril. As fibrillar morphology has potential to significantly enhance the mechanical strength, it would be of interest to trace the behavior of secondary plateau by changing the type of dispersed phase which based on the individual molecular characteristic of each polymer the typical behavior of the secondary plateau may vary. Furthermore, the ability of the LME to spin nanocomposite fibers is still under investigation which would be shared in the near future.