Viscosity, in simplest of terms, is the measure of the resistance to flow of a liquid.

Liquids that resist flow or do not flow as freely, like honey or oil, are said to be higher in viscosity than liquids that flow freely, like water. Viscosity of any liquid gives insights on its structural properties and how the behavior of the liquid is expected to change under conditions of varying stress, temperature, pressure, & other external factors. 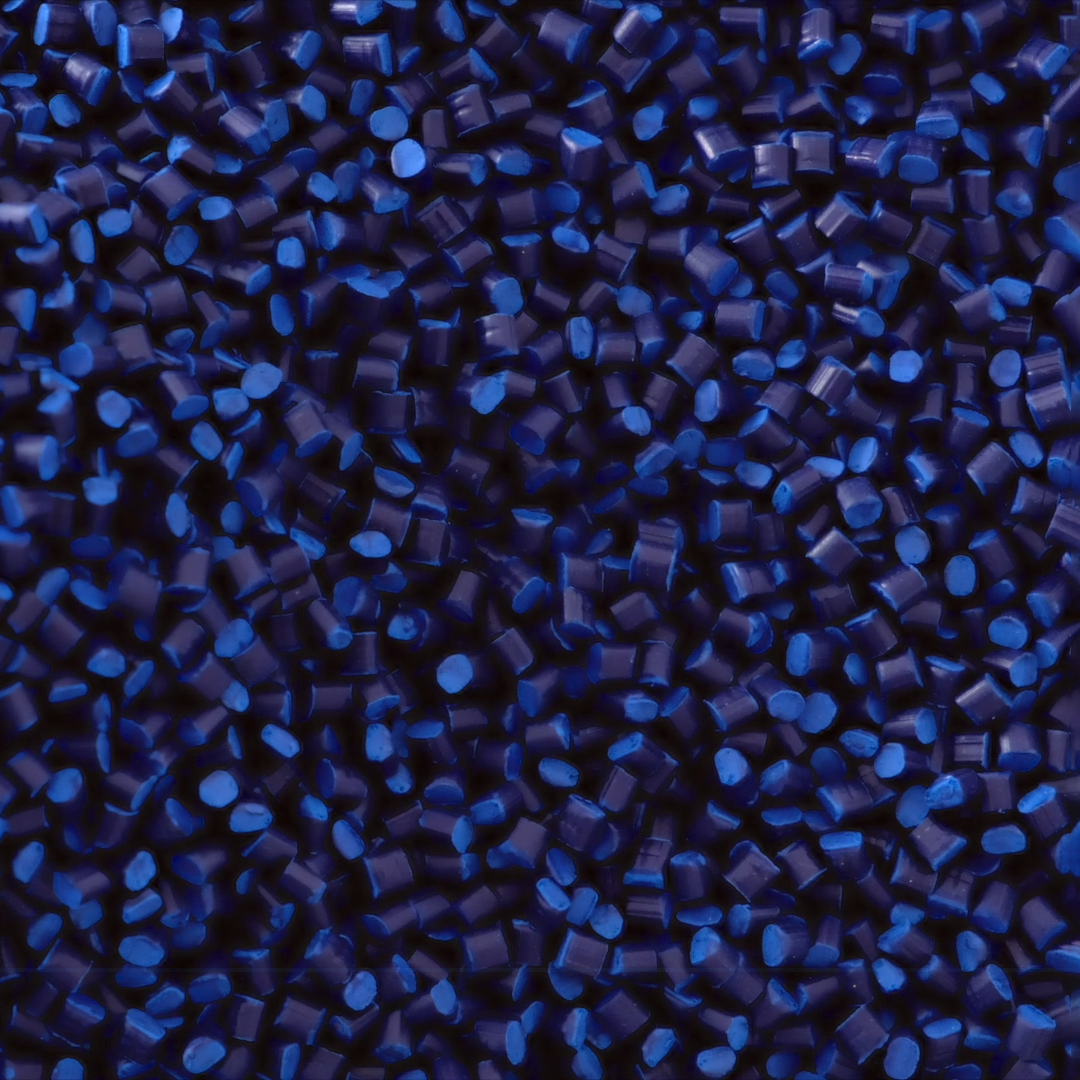 
Click here to learn more about rheology as a whole, and how our polymer evaluation rheometers can help support your process.

Viscosity of polymers is a critical property of the polymer that can help us understand its structural nature.

Typical polymer melts exhibit high viscous behavior, suggesting that the molecular interaction between the polymer chains is strong and hence they resist slipping over each other & cause a drag on the melt flow. These interchain forces can be caused by factors such as chain entanglements, molecular weight, molecular weight distribution and other chemical interactions. 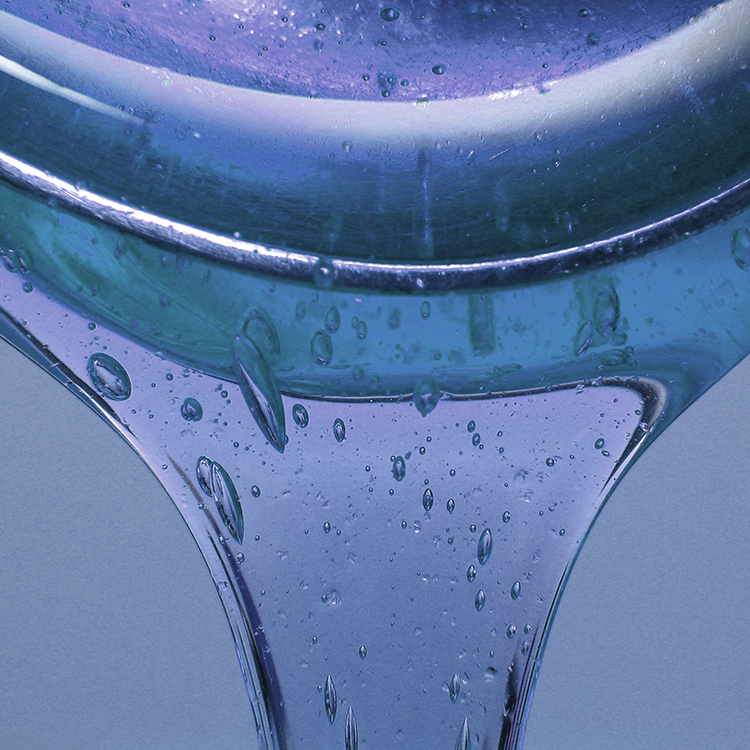 
Click here to navigate to our blog posts related to polymer evaluation.

Understanding polymer viscosity behavior helps in the determination of fluid behavior in polymer flow-related processes. Processes such as injection and blow molding, extrusion, calendering, and more analyze flow characteristics of polymers for their applications, providing valuable information for production and quality control.

Have questions, or looking for more information? Click on the corresponding buttons below to contact us, see which industries we serve, or press Read More delve into more technical information regarding viscosity and rheology. 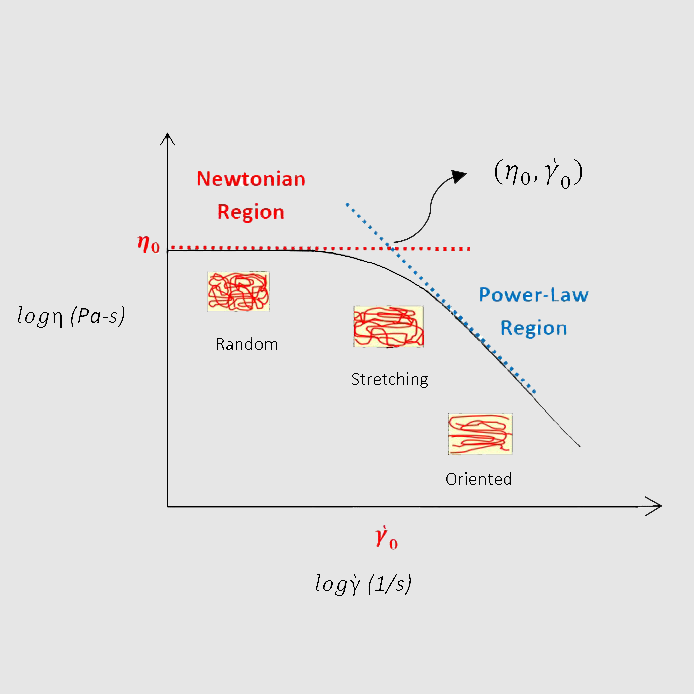 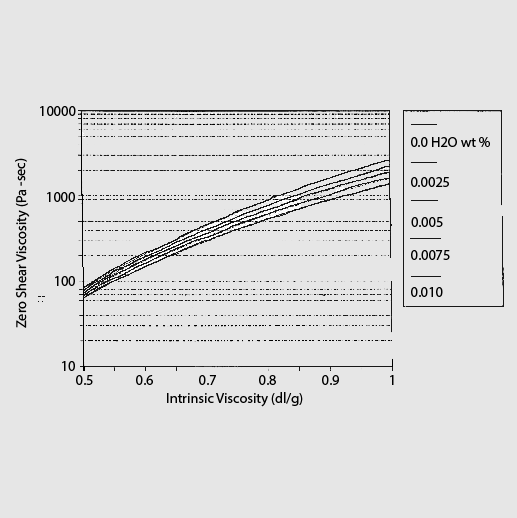 Correlation of Melt Viscosity of PET to Solution Intrinsic Viscosity 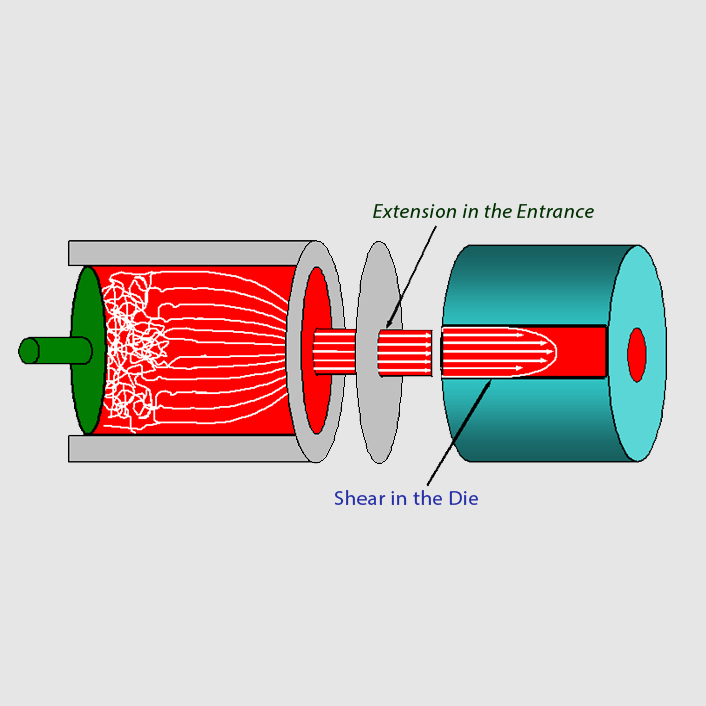 
By measuring the solution viscosity, we should be able to get an idea about molecular weight.

where η is the viscosity of the solution, ηS is that of the solvent and c is the polymer concentration, usually expressed in grams per 100 cm³ or in grams per cm³. Another important quantity in very dilute solutions at vanishing shear rate is the intrinsic viscosity (also called limiting viscosity number) which is defined as:

Hydrodynamic Volume of a Particle

Then the specific viscosity of a very dilute solution reads:

This and similar expressions for other particle geometries can be found in many textbooks. In the case of dissolved, soft polymer particles, Einstein's relation has to be modified. It has been shown that the equation is still applicable to dissolved polymers if the hard sphere radius is replaced by the hydrodynamic radius of the polymer coil. Then the equation can be rewritten in the form:

where αh = Rh / Rh,0 is the expansion of a polymer coil in a good solvent over that of one in θ-solvent and Rh,0 is the radius of an unperturbed polymer. The equation is known as the Flory-Fox equation. Under θ-conditions it simplifies to

The constant Φθ has a value of about 4.2·1024 for rigid spherical particles if [η] is expressed as a function of the radius of gyration.1,7 If the intrinsic viscosity is measured in both a very dilute θ-solvent and in a "good" solvent, the expansion can be directly estimated.

The values of αh typically vary between unity for a θ-solvent to about 3 for very good solvents increasing with molecular weight.

Both 〈Rh,02〉 and αh can be expressed as a function of molecular weight M:

where C1 and C2 are constants, M0 is the molar mass of a monomer and ν is a scaling exponent. The value of ν depends on the solvent-polymer system and its temperature. For example, under θ-conditions the scaling exponent has the value ν = 1/2 and in a good solvent ν = 3/5. With these expressions, the equation for the intrinsic viscosity can be written in the form

This equation is known as the Mark-Howink or Mark-Howink-Staudinger equation where K has the dimensions cm3/g x (g/mol)a. Mark-Houwink parameters have been tabulated for a large number of polymer-solvent systems in standard references. These parameters are usually determined from a double logaritmic plot of intrinsic viscosity vs. molecular weight:

Similar profiles for different polymers can be obtained. Variations in the Mark-Howink equations can also help us obtain relationships between Melt flow Index/Rate (MFR) and the Intrinsic Viscosity (IV) of certain polymers, such as PET. The Dynisco Rheometers are equipped to relate MFR & IV data for PET. Get in touch with our experts today for more information.


Learn how Dynisco can help.

Measuring the viscosity of polymers in your process can help maintain polymer quality, recycled or otherwise. Dynisco's laboratory and quality control instruments such as our LMI-series of melt flow indexers or our online rheometers can provide you with accurate and up-to-date information on your process, and can help you meet your sustainability and quality goals. Learn more by visiting our product pages, or ask an expert for more information.