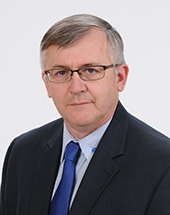 Kevin has been with the Polytest and Online product lines for since the early 2000's starting with being on the ATC880/UPR800 project.   From the beginning, Kevin has been working with the online product family having taken over the lead Engineering role in 2009.  Originally, Kevin was hired by Alpha Technologies but from the beginning, has almost exclusively worked with Dynisco’s product lines.  He was officially made a Dynisco employee in 2015.

With 30 years of engineering experience, Kevin has held a variety of roles in design and manufacturing of Commercial, Industrial and Military Systems and Devices.  Prior to Dynisco, Kevin has worked for companies that created products for military/government surveillance, radiation detection and audio processing for radio and television.  Apart from Engineering positions, Kevin has also held production and technical support supervisory positions.

Kevin holds a Bachelors of Science in Electrical Engineering from Cleveland State University with a double minor in Computer/Information Science and English.

Dynisco - Experts
experienced, staff, experts, worldwide network, sales, languange, technical expertise, total support, knowledgeable
Extensive Worldwide Network of Experts. Our experienced staff and expansive sales network can provide you with important information including pricing, part and model numbers, stock availability and quotes. They can arrange sample trials to determine the suitability of Dynisco equipment for your application. Perhaps most important, they can communicate clearly and effectively in your native tongue.